Meeting started at 9:30am today. Now, its 8.20pm and we're still at it. Strategic meeting ...... must it be this loooooong. Am getting really tired. My brain is burning. Probably it will end by 10pm...I hope. At least I know I'll be relaxing at Genting tomorrow. No golf this weekend. Need some time with the family. Everything's is set. Common my friends...let's us finished this meeting quick. The real issue will be about numbers. .....Anyway I know damn well we need to resolve all the discussion points ...TODAY. ARGGHHHHHHH!!!!!!!
Posted by golfer melayu at 8:20 PM 2 comments: 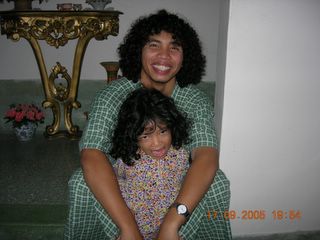 The eldest and youngest cousins in the family...rambut serupa l

Posted by golfer melayu at 7:48 PM No comments:

"Hellooo AJ, how are you Bro? How's everything? Anyway, Miss F has been looking for you high and low la...mana u pegi?"
"Aiyoo Golfer Melayu....I'm in Mekah la, doing my umrah, be back at the office this Thursday"
"Oppps...sorry Bro...didn't know...I'll see you later...Assalamu'alaikum"

In the Business Times today...

MAS Chairman aims to spring a surprise... Wow!!! Interesting. Let's see what he wants to do.

1) Slash costs
- cut fuel cost by 10% (hmmm...unless you cut down the routes this might not be possible Sir...Have you seen the cost of fuel lately?)
- implement a programme that could save up to a third of procurement cost ( possible, ...how? Don't buy "original parts" lor... You go buy some so-call certified Taiwan or China-made spare parts. Sure cheap one... I"m REALLY getting worried to take MAS flight now.

There was also a Q&A article between MAS Chairman with Business Times. A few comments that he made in the article, made me raised my eyebrows ..eg...

when asked about his new MD...
"...he's an oil man, therefore he can manage the fuel cost and so on. That one, I'm not too sure whether we'll get a discount from Shell....I do not know at this point" ( he must be expecting the 10% cut in fuel cost from this...)

"He plays the guitar; for someone who likes Eric Clapton, can't go wrong with him" (Yikess...what a reason..)

something about the plan in improving the revenue

In summary....nothing creative in trying to turn-around the airline performance. Same old management mantras and philosophies. Yawn...ho,hum...I wanna go to sleep.
Posted by golfer melayu at 1:55 PM No comments:

Reached another milestone in my golf..

Saturday was hectic. Gotta help my mum in the morning, for the "kenduri tahlil" gathering that night. Arranging the house needs strong arms, legs and back. Usually family gatherings will end late,... very late at night. At 3pm , gotta go to another "kenduri tahlil" at my uncle's house. I was not even planning of joining the PTGC club monthly medal on Sunday....but in the middle of doing the sitting arrangement, I felt the urge of calling the club, asking whether there are still avalaible place to join the competition.

"Who's there? ...Golfer Melayu, just drop by, man!!! I'll make sure your name will be there.." PTGC sports center.

The Kenduri ended at 11pm. Went home at about 1am. Have problem to sleep. Whatever I try, I just can't sleep that night. Can't do nothing with the wife la...red flag. When I finally dozed off it must have been around 5am.

6am, woke up. Took a shower. Sembahyang subuh. Cooked my own breakfast. In the meantime, the head feels like "I can fly". Headed over to the club. Registered.
Tournament starts at 8am. I started from the 10th tee-box. Gotta bogie on first hole. Rain started to drizzle at the end of that hole. On the 2nd hole, rain came pouring down. The siren blows. Stop play for half and hour. After play resumed, I got another bogie...on a par 5. Doesn't seems to be my day.

2nd Nine...started well...scored 39, back nine. Came back with a 78. At last, I broke 80 in a competition!!!!!! Got 2nd in the medal A category. The prize..a cheap-looking trophy with RM210 Jaya Jusco voucers. The wife loves the voucers. I like the fact that I broke 80 in a competition, eventhough I hate the alcheapo looking trophy. Well....you can't win them all.
Posted by golfer melayu at 1:20 PM No comments:

She sells sea shells by the sea shore. The shells she sells are surely seashells. So if she sells shells on the seashore, I'm sure she sells seashore shells...........
who cares!!!!!
Posted by golfer melayu at 12:31 PM No comments:

A few days ago, a friend of mine asked me about my view on the new CEO and MD appointment in Malaysian Airline System. Let's look into the matter a bit. Malaysian Airline System, or fondly known as MAS, a Government-link company, the 1st airline company of Malaysia, has been at the losing end lately, to be exact, RM280 Million in their 1st financial quarter. That translate to about RM 90 million a month. Phew!! The previous MD quit after sitting in the office for less than a year.
Then, there was this big BRU-HA-HA about their largest investment arm, in this case, Khazanah (another government owned investment company) who intended to lure big foreign names in the airline industries into MAS, in order to turn it around. The idea was quickly critized by the so called nationalistic and patriotic politicians. "Hellooo!!!, we should be able to find suitable candidates for the job, locally!!!!" That idea was quickly flushed into the toilet and thrown out of the window.

They found the candidate allright. A local guy which previously held a management position in an international Oil and Gas company. Hmmmm???? Do I think he can turn the company around? Dunno. Coz if you asked anybody that's been in a management position they will probably say that they could do the job better. I really wish him luck. He needs it.

I believe he will follow the basic management principle.
Management principles 101, when going into financially troubled company
1) Quickly find ways to cut cost
2) Find areas where it can be run in a more efficient manner
3) Find ways to increase market share
4) Get good people to be around you .... hint.... your buddies

1,2 and 4 are easy. Concentrate on areas where it's in your "circle of influence". 3 is the tricky part. The person needs to understand the industry. He needs to have the creativity, the "think out-of-the box" mentality, as the leader, to come up with vision and various ideas to move the company to a new height. And that's probably the reason why I felt that the initial idea of getting a big-gun of industry-specific foreigner to head MAS is the right thing to do. I am not un-patriotic or un-nasionalistic. It's just about getting the right person to do the job. Before handing the CONTRACTUAL job to the foreigner, proper KPI needs to be agreed between the employer and employee. A local should shadow the guy, so as , there'll be business acumen and creativity transfer.

But again maybe I'm wrong. Maybe it's just bad karma to be the pioneer of anything in Malaysia. Just look at the pioneer Malaysian airline and auto company. Both are not in healthy financial position. And yet, another BUDGET Malaysian airline company and another Malaysian AUTO company has been raking in the profit. Both are lead by locals. So, What gives???
Posted by golfer melayu at 10:57 AM No comments:

Yesterday, I received a link purportedly will enable anybody in Malaysia to check and pay their car summons online.

ARGGHHHHH!!!!!! Just my luck. Gotta go to the POOOLIZEE station and make my payment on-site.
Posted by golfer melayu at 11:10 AM 28 comments: 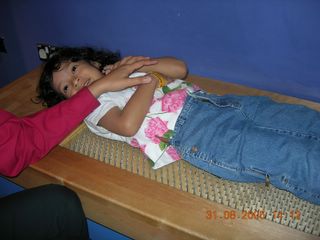 Posted by golfer melayu at 8:44 PM No comments: 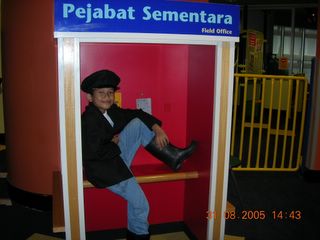 Posted by golfer melayu at 8:40 PM No comments:

Yesterday, Sunday......My usual golf time with my golf buddies, handicap 9, 10,10 and 14., at the Club. At the tee-box of the first hole, ZAB, a golfer that used to be a single handicaper, now a ten, gets ready to hit his first drive. You see, in golf, the lowest handicap player will always gets the honour to hit first and ZAB has always been the lowest handicap player in the group.

After that ZAB's game became haywired. Menjadi gak "Psyco" gua. he,he
Posted by golfer melayu at 10:30 AM No comments:

Whoa...got a mail from MGA online

We are pleased to inform you that your official NHS index as at
1st September 2005 is: -

Your calculated handicap for your primary club: PERANGSANG
TEMPLER GOLF CLUB - (SEL) is as follows:-


You can always check your latest NHS scores and your buddies
scores at www.mgaonline.com.my.

A trip to Aquaria, KLCC